skip to main | skip to sidebar

Is the Fed’s QE2 program a monetization of sovereign debt? And hence, does it enable more fiscal policy action?

Looking at it from its effectiveness as an enabler of private bank lending, it falls short. QE 2 operationally is the purchase of long-term government bonds by the Fed. The largest holders of this security are commercial banks, who will essentially get cash, or in bank parlance, additional reserves, in exchange for their government securities.

Scott Fulwiller has given a convincing explanation for how banks do not lend their reserves. Put another way, banks do not need reserves to do their lending activities. If a bank is to grant more loans, it needs adequate capital, in order to buy risk-weight assets, and it needs to have credit-worthy borrowers. If it has both of these, it can always raise any deficiency in its reserves, i.e. deposit base, by borrowing in the interbank market, or from the Fed’s discount window. If it doesn’t have adequate capital, or a compelling borrower, no loans will be extended.

So QE2’s flood of new reserves into the banking system will not necessarily result in a flood of new loans. So what can this be useful for? Well, you could look at it this way. Excess reserves may not fund more loans, but any excess will be put into more liquid marketable securities. If the natural buyers of government bonds suddenly have more cash, and lesser of the bonds, will they be more susceptible to buy bonds in the next auction? Yes.

The Fed , by its charter, is not allowed to buy government securities in auctions, it can only buy them in the secondary market, via open market activities (or QE) . Treasury, on the other hand, is not allowed to fund its deficits by printing money, it needs to float bonds to finance the deficit. The Fed, by buying the older issues of treasury via QE2, has given the banks, the natural buyers in Treasury auctions, a clean slate, so they can again be buyers in the government’s next auction. Because they have a clean slate, they will be ready to fund a higher government deficit, without raising borrowing costs for the government. So they can enable the government to undertake more pump-priming activities.

This can be tricky, though. The Fed should clearly show the market that its interventions in the bonds market will not make owning government bonds too penalizing (by causing zero to negative returns), or the banks will just stick to their cash, and not participate as actively in the next auction (thereby increasing government borrowing costs again).

No Fed easing required. QE2 only increases reserves, most of which will likely be kept within the banking system, and nowhere near the real economy, and it only increases the Fed’s balance sheet. It may result in some banks using the new reserves to speculate in risk assets other than loans (if they do have adequate capital, but still not enough credit-worthy borrowers). Some of it may be deployed into risk assets by credit-worthy borrowers who are not building businesses, but are building portfolio assets on margin. But that’s another story.

Our point here is, does the Fed’s QE2 program enable further fiscal policy? You could say yes, but it is not necessary. Government deficits, which put money into the people’s pockets, who will then spend it in the economy, enables its funding by itself.
Posted by Rogue Economist at 5:17 PM 0 comments Links to this post

I don't know what you heard about me
But a bitch can't get a dollar out of me
No Cadillac, no perms, you can't see
That I'm a motherfucking P-I-M-P

Yo, I’m a super-freakin’ banksta
At the right basis points, I securitize yo’ grandma
When I get in trouble, you’ll save me ‘cos I’m so fly
I’m 2big2fail, I can blow tha system sky-high

Don’t get mad at me ‘cos I’m rich
I’m just doing God’s work, bitch!
No Cadillac, no perms, you can't see
That I'm a motherfucking P-I-M-P 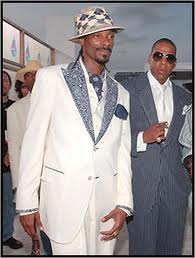 Posted by Rogue Economist at 7:05 PM 0 comments Links to this post

Could there be a silver lining to quantitative easing/currency depreciation of the US dollar? Previous posts here, and much of elsewhere, have focused on the destructive effects of the easing. But my question now is, could it actually have a positive effect?

In my thinking, it all depends on whether it succeeds in effecting one of the lesser talked about objectives that the global economy right now – realigning and revaluing of currency values, commensurate to the growth rates of their respective economies.

Right now, global imbalances persist because certain countries choose to peg their currencies to the US dollar. So if an overvalued US dollar results in a trade deficit to the US, the self-correcting mechanism of an appreciating currency does not result. The continuous peg of exporting countries on the dollar keeps it from doing so. So the US continues incurring a trade deficit while the pegged countries continue having their surplus.

What quantitative easing would do, more than causing the hoped for but largely improbable reflation in the US economy, is to cause this inflation elsewhere, mainly due to shifts in hot money flows and the carry trade, particularly to the countries that peg themselves to the US dollar.

It is inescapable. If they choose to keep the peg, the more inflation they cause on themselves, because their trade surplus results in a continuous influx of currency into their economy, but also because their peg forces them to allow in more of the US dollars being printed. The more the Fed eases, the more dollars these pegged currencies have to sterilize, and hence, the more they too, end up loosening monetarily. A loose monetary policy is the last thing a surplus country with a booming economy should be doing.

A silver lining that might result is an overall increase in salaries of the surplus nation’s local workers, to compensate for the increasing costs of goods domestically. This would lead to more equalization of living standards globally. Done the right way, and in the right areas, and it would no longer matter which country you go to, to hire a mechanic, a barber, or have your taxes done. They will all congregate to one global standard price.

On the US side, this means a return of a lot of manufacturing capacity, as their local manufacturing wages become more competitive vis-à-vis the rest of the world. As for the rest of the world, i.e. the emerging markets, their populace’s rising income should make their local economies more readier to accommodate higher value-added services and businesses that currently are only viable in the US.

Could we see the rise of an equal to Wall Street in Shanghai or Melbourne? Or an equal to Silicon Valley and Hollywood in Mumbai? What about an automotive design center considered a peer to Detroit situated in Bangkok? Or a garment design center similar to New York, but located in Jakarta. Could this actually happen, or can this be nothing more than a pipe dream for the emerging economies?

My guess is that as things currently stand, a fast-rising inflation will crush these economies. Inflation will end up killing the people’s real income, and hence, their purchasing power, and lead to over-all depression in the economy. Which is why they are taking steps to prevent this from happening. They would rather have capital controls, and likely, would rather give up the peg than allow hyperinflation to kill their economies.

But what should be done, such that the alternative scenario could happen? What is needed, so that emerging economies can take this opportunity to grow and nurture viable higher value-added service economies that could be considered equal level alternatives to those in the US? Previous posts here would provide some ideas.

Not all emerging economies are as big as the BRIC nations, hence not everyone has the requisite economies of scale to nurture high end service-intensive industries that can compete side by side with the US. So they need to set aside any local rivalries, and start thinking about creating regional trading blocs.

Higher end service industries need a lot of higher-end personnel. Hence, they need to open up and allow unfettered migration of experts into their local economies. As repeatedly recommended, like a broken record, on this site and elsewhere, they need to develop a healthy thriving local consumer base. Do so, and perhaps, even higher-end personnel they have already lost to the developed economies will start coming back to help jumpstart the transition to higher end. They need to put special focus on and promote small business, the largest employer in the aggregate of the economy. Since a thriving and healthy local consumer populace will start eating more and demanding more, they need to reinvest in agriculture.

I speculated as much once before.

Addendum: I add more in comments section here.
Posted by Rogue Economist at 5:13 PM 0 comments Links to this post

"Conventional approaches, unconventional conclusions" on the global finance and economic issues of the day. Rogue Econ has been a banker and financial consultant in several countries. Welcome to my blog.

3 questions test of whether it is worth the public spending

1. Does this create productive jobs for those who would be otherwise unemployed?
2. Will the newly hired workers have meaningful income that they can spend back in the economy?
3. Is the output of the jobs adding to capacity of goods/services demanded?
If it generates income for the unemployed, aggregate demand will go up. If it adds to demanded capacity, there will be no inflation. If the output is demanded by people, there will be no wastage.